Don Bosco Hockey started 2023 right where 2022 ended, notching back to back wins and capturing the Harry Rulon Miller Tournament for the second time.  Despite the start of the season being pushed back this year by the NJSIAA, the Ironmen opened up with three straight wins, defeating Seton Hall Prep, St Peter’s Prep and Pope John.  Following the three in state wins, the Ironmen then made their annual trip up to Boston to take on Xaverian Brothers and BC High.

The first matchup against Xaverian Brothers, took place at famed Matthews Arena on the campus of Northeastern.  Junior goaltender, James Tarabocchia (1.00 GA, 96.5%) stole the show, putting up a 38 save shutout against #8 Xaverian, while Junior defenseman, Luca Chiaese (2g, 7a) scored the games only goal to give DBP a 1-0 win.  In the second matchup, Bosco took on #3 BC High at Babson.  The Ironmen jumped out to a 3-1 lead, with two goals by Junior Captain Dean Toskos (7g, 12a) and one from Senior Captain Ty Oller (9g, 8a), but BC High battled back to tie the game in the final minutes. As 2022 began to wind down, Bosco continued its hot play, notching three more Gordon Conference wins, defeating Gloucester Catholic 5-1 and Bergen Catholic twice in two days.  Following the New Years break, Don Bosco faced off against the HRM tournament host and Gordon Conference opponent Princeton Day.  Once again, Bosco jumped out to a lead on goals by Toskos, two by Oller and Freshman Ryan Murphy notched his first varsity goal in a 4-2 win.  The following day, DBP took on Lawrenceville School for the HRM title.  In what proved to be a back and forth affair, Bosco had a 2-1 lead through two periods, but allowed the equalizer in the third.  As the game went into OT, the Ironmen capitalized on a power play opportunity and once again, Senior Ty Oller delivered the game winner. Don Bosco Hockey is proud to announce that Seniors Liam St. Pierre, Ty Oller, Ethan Marich and Junior Dean Toskos will serve as team captains for the 2022-23 campaign. “All four players have been key contributors throughout their time as Ironmen and we look forward to an exciting year ahead.  Playing one of the toughest schedules in the state, they will be counted on to bring leadership qualities on and off the ice,” said Head Coach Greg Toskos. Playing in his first Varsity season in 2021-22, Defenseman Liam St. Pierre (1g, 13a) appeared in all 28 games, leading all defensemen in plus/minus (30).  “Liam really gave us stability on the backend all year and we look forward to seeing his offensive game continue to grow,” said Toskos.  Also joining Liam from the defensive side of the puck, Senior Goaltender Ethan Marich (21-14-3, 90.7% Sv%, 2.16GAA) a four year varsity player, “Ethan has been a huge part of our success since his Freshman season, he’s a strong voice in our locker room that the players respect and the coaching staff felt he’d be a great piece to the leadership group.”

Joining Ethan and Liam are forwards Senior Ty Oller (23g, 30a) and Junior Dean Toskos (8g, 9a) who both will be counted on to lead the Ironmen scoring attack. “Both Ty and Dean have grown up playing together, they’ve been teammates at Bosco for three years now and we expect them to be key contributors like they have been in the past,” said Toskos. Don Bosco will play one of the toughest schedules in New Jersey high school hockey starting opening night, December 9th vs Seton Hall Prep.  Along with the grueling Gordon Conference schedule, DBP will also take on Non-Conference opponents, Morristown Beard, Suffern and will travel up to Boston for games against Xaverian High School and BC High. 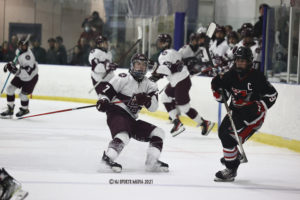